This house is only a couple of years old, yet it is almost impossible to fault it for its young look. The interior adds to the presentability of the house: antique elements, classical furniture, and vintage design. Why the young and modern family chose the traditional design against the dynamic modern solutions?

First, the house structure required the classical approach. However, that was not the first thing to do: the designer could use the contrast of the house exterior and interior styles.

Yet, the most important thing was but the solidity and conventionalism of the house. Before that, the young family lived in the modern apartment. However, moving out of town, the owners sought to leave the vanity, and the constant rush toward fashion. Their house became the image of stability, spiritual opulence, and traditional values. This life philosophy can only be expressed by the classical interior.

Many a time such decoration, which befits mansions of XIX century, seems far-fetched and artificial. Things here go another way: this style is but postulated by the intention to emphasize the attitude towards lasting values and a certain life style. Master of the house is not only the head of the family, but a daily breeder too; a separate study is nothing more but a necessity. Furthermore, the master of the house is hunter, and he needed a place for his trophies. The separate trophy room became the ideal decision. That is how the grand room appeared in the semi-basement, where one can cloister him or herself or spend some time with friends. The mistress of the house has taken no offence as well: the huge and fully equipped kitchen and the big dining room to amuse guests with delicacies. It is certainly a dream for every preserver of the family hearth. All benefits of the suburban house were used in full: the living room with the fireplace, separate bedrooms for kids, separate bathrooms for guests, owners and their kids.

All materials meet the general style: all rooms are linked with the oak furniture that became the base of the interior. The house also has traditional pillars and decorative elements that resemble pillars. They are acting as support pillars in the dining room and anteroom. Wooden abutments in the study visually extend the space of the room: the ceiling is lower comparing to other rooms, because the ground floor has two levels. The contrast is the base of the color palette: the dark wooden furniture looks perfect with the light walls in the background.

Nowadays, several years after, one can see that the interior leads the full life, meeting all needs of owners. Homeowners bring memories from their travels: copper pots and antique lamps, porcelain kitchenware and the big collection of traditional Belarusian elements.

The classical interior of the house did not became the holy cow. A certain eclecticism is visible even inside the interior where the basic English interior is complemented by the Italian furniture and “spiced” by Belarusian objects, like a millstone in the bathhouse base and a britzska by the house. Due to certain liberties allowed, the house does not look fossilized. It is vivid and lively, and the modern elements are in their places too.

Designer’s commentary: I am usually working in modern style, yet I had no fear before the classical one. As for me, a designer can freely tinker with classical materials, shapes and details, as in any other style. In general, there is no such style as a classical one. When we say “classical”, we imagine prototypes, elements and details descending from the Byzantine, Roman or Gothic style, we refer to the pre-Renaissance of Tuscany, to the Renaissance era itself. I think that this collision gives the carte blanche to designer who is free to use any ideas and combine them in any possible way gaining advantage from different and even contradictory elements. Me, for instance, I see no sense in complete pastiche: it is ineffective as in materials, as in costs. In addition to traditional interior details, one can find everything what a modern needs to lead the proper lifestyle: a shower cabin, AC system, TV sets. It is but comfortable, not to mention the general coziness and beauty. This is the most important part, I believe. 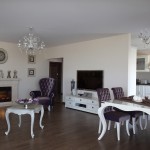